Yes boys and girls I've branched out to Dystopian Wars. Thank you Spartan Games! As I was already looking for a naval based game, it wasn't much of a leap. Let's face it, GW is becoming quite the bully of late and I am not all that impressed.

So after seeing a game or two turn up at Marscon this past January I decided to take a look. I liked the Brits and my buddy Aiden jumped over too the Russians. My wife is even curious, she's trying to take over my fleet..lol

So far Aiden and I managed a short game to work out the mechanics of the game and had a rather good time of it.

I'm liking the consistent scale of the miniatures, they look great and paint up fast. No more excuses for playing with unpainted figs. The squadron activation game mechanic keeps things moving along nicely and the whole exploding d6 concept can lead to some very interesting outcomes for the smaller "weaker" units.

Will I stop playing 40k, nope. Now I have a nicer option and I like options...;) 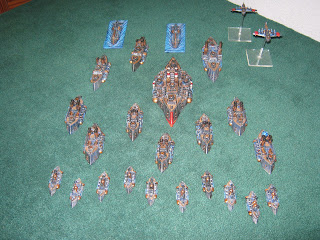 Posted by Raghnall at 16:17 No comments:

Its going to a  great night, finally have work schedule worked out, have authorization from the family. Jim's on board, ready and willing.

First game with 6th edition rules, actually first game in in about a year..oiy!

1500 points My Catachans vs Jim's Steel Legion. We just thru lists together and went for it.

Well Jim got to go first after deployment. He was going to attempt a two pronged rush up both flanks. He was going to have to skirt some hills to avoid my waiting autocannons. Sgt. Harker and his boys were in position on the left to intercept Jim's plasma cannon armed sentinel squadron tasked with escorting his chimera mounted stormtroopers.

Harker's squad came under fire from the sentinel squadron. Luck being a fickle witch that she is... Harker was the only casualty thanks to a couple of lucky plasma blasts and cursed dice.

Now it was my turn... I was determined to avenge the fallen Gunny....

After moving to secure the right flank (hopefully) I unleashed a torrent of fire upon my enemy...

The hell was unleashed as 9 mortar teams opened up, lobbing their high explosive shells into the middle of Jim's small infantry formation. The Steel Legion's 1st platoon command was decimated

Well, Fate being an even more fickle witch than luck and having a warped sense of humor, stepped in.....


...but I'll be responsible for cleaning the house for awhile. Thanks Fate;)

She can't help herself, its the way she is. It is for this reason that I commandeered my oldest son's room after he moved out. Finally I had a home for all my stuff, she no longer had to deal with my hobby space trying to take over the living room. She was much relieved.

However, we have been skirmishing over how neat I keep my room ever since. 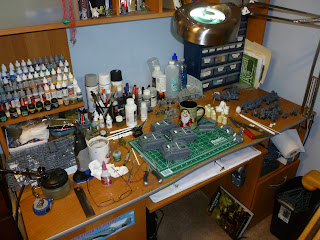 
2012 has come and gone, so whats ahead for the coming year?

I am going to post more often for starters, 5 posts was really rather pathetic!

Let's how far I get with this list this year:

learn how to use my airbrush ( thanks Mary ;) )
figure out just what to do with all the Dark Angel's marines I received ( thanks JD )
build gaming table
build fortress for said table, bout time these guys got to have a home to defend....

maybe and I do mean maybe, add some Grey Knights...