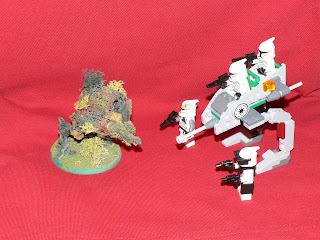 Legos... Lots of Legos. My son recently had his 7th birthday. He got and already has several sets of Legos. What's he do after the new sets are assembled? Have a WAR! He turned the living room floor into a raging war zone, complete with bunkers, and roads and rules of engagement. Yes, he has rules, I have no idea how they work, but then I'm not a seven year old.

So today its Legos and green army men battling for control of the living room, tomorrow scads of model aliens marching across the tabletop. War gods be praised!! Makes papa proud.

At least by then I'll know what the rules are...
Posted by Raghnall at 16:25 No comments:

This blog is for the guardians of mankind after all;)

Ah, the Empire. My first foray back into the Warhammer universe. Let's face it I've got a fondness for soft, squishy, swarmy armies. Something which was going to drive The Boss insane if I had continued to take up counter space, but that is another topic altogether.

My other really long term project: The Royal Hochland Guards 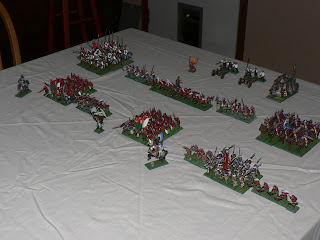 Long story short, A Hochland Regiment seconded to the Reiksguard, answerable only to the Emperor.

It's actually gotten a bit larger since that photo was taken. I've added handgunner detatchments to the units along with more knights and great cannon. The theory is to be able to field a front of 5 units supported by cavalry and artillery.